Posted on September 5, 2013 by silaschampion

Here’s short story I wrote after attending the county fair in my hometown.

Two old men watched the sun sink into a thin bed of feathery clouds. The shorter one ran his fingers through his wispy hair. The wrinkles on his tan forehead showed thirty years of farming. 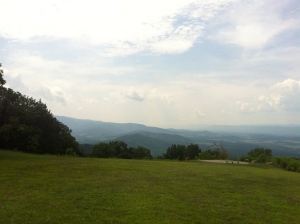 “Those clouds ain’t going to cut it. There will be no rain tonight.” He spat into the dust of the fairground. The larger man tucked the thumbs of his huge hands behind the straps of his overalls.

“No, I reckon not.” He nodded toward a man leading a stubborn milk cow. “John said he got almost half an inch the other day.” The short man dropped his hat back on his head.

“I guess we got two-tenths the Sunday last. My corn sure needs some more.” He leaned against the post of a sign that read “Davis County Fair, 1863.” A group of barefoot children chased a chicken between the two men.

“You kids watch where you’re going!” the large one said. The children paid him no mind.

“Kids these days.” The short one turned to his larger companion. “Did you see that big Hereford bull that Jackson brought here? They say he bought it in New England.”

The big man shook his head. “No, I haven’t. Let’s go have a look.” They walked past two snake-oil salesmen who stood before a gaudy wagon.

“Hard to believe he could ship it all the way here with the war on.” The big man watched a pretty woman extol the health virtues of various liquids in several bottles. “I figured the trains would be busy.”

“That’s just it. He bought it from a man who lost his sons at Fredricksburg. He got a good deal.” A cloud of worry came into the bigger man’s eyes. The short one took off his hat. “You still haven’t heard from Caleb?” Herubbed his head again.

The big man sighed. “Not a thing. In his last letter he was in Pennsylvania, but that was three months ago.”

The shorter man thought of his own two sons. “You think he was at Gettysburg?”

The big man shrugged. “No way to know.”

“I can’t believe they stopped Lee. I didn’t think they would ever do it.” The big man said nothing. He picked up a bottle of amber liquid. It smelled like vinegar.

“Those idiots in Washington don’t know what they’re doing. They just dither all day.” The short man spat on the ground again. He looked at all the bottles with distaste. The big man picked up three small blue ones and handed the girl a dollar.

“You are wasting your money.”

“It helps the wife’s headaches.” He tucked the bottles in the pocket of his overalls. The rumbling of a wagon sounded on the main thoroughfare. Both men turned. Two brown horses pulled a claptrap wagon right through the festivities. Children and chickens scampered out of the way.

“Slow down! You’re making dust!” shouted a snake-oil salesman. Neither man noticed any of this. They stood open-mouthed, staring at the gaunt young man sitting on the passenger side.

“Good Lord, it’s Caleb.” The short man threw his hat in the air. The big man opened and closed his mouth, but made no sound. The wagon stopped in front of the two men. Dust covered Caleb’s pale face and blue jacket.

“Hello, Father. I’m back home, at least most of me.” He patted the bandaged stump of his right leg.

“Better to have part of you home than none at all.” The big man reached for his son’s hand.

Two old men leaned against an antique tractor. The lights from the midway brightened the purple twilight. Smoke and noise rose from the tractor pull on the other side of the fairgrounds.

“Not going to rain tonight, is it?” The short one adjusted his seed corn cap. His taller companion nodded.

“No, I reckon not. We got a little shower three days ago, about two-tenths.”

“That’s more than we got. Dave said he got almost half an inch.” They watched two men try to start an antique tractor.

“I think they did.” The short one pointed to an old John Deere. “My dad had one like that when I was a boy.” They walked over to look at it. “I think I got it stuck at least twenty times.” The big man’s cell phone rang. He managed to dig it from his pocket before it went to voicemail.

“All right, I will be right there.”

“Who was that?” The short man inspected the tractor carefully.

“My granddaughter. She got a blue ribbon on her 4-H project. She wanted me to see it.” The two men walked past the midway. The smell of funnel cakes wafted over them.

“She found some old blue bottles in the barn. She’s pretty handy at making art out of stuff like that. Beats all you ever saw.”

“No, I don’t know what they are. Some kind of old medicine bottles or something.” The two old friends nodded hello to another man.

“You heard from Justin?” The shorter one adjusted his hat again.

“Not yet this week. He’s still in the hospital in Maryland.” They stopped to let a rowdy group of teenagers walk past.

“Those idiots in Washington. They couldn’t pour piss out of a boot with the instructions on the heel. They don’t know what they’re doing, and boys like Justin pay the price.” He spat on the ground. The big man said nothing.

The smell of flowers rushed out the door of the Crafts Exhibition building. They squinted against the light as they walked into the fragrant room. The excited talking ended immediately. Both men stopped and stared. A tall young man stood before them in army fatigues. His mother stood on one side, grinning. His wife stood on the other. The big man’s granddaughter jumped up and down. Everyone else gathered around, breathless with delight.

The soldier looked down. “This one is temporary. They are still fitting the permanent one. It got me home, though.”

“Yes, yes it did.” The big man grabbed his son’s hand.

If you liked this story you can also check out Finbar’s Fiddle on Amazon.

This entry was posted in Short Story, Writing and tagged Short Story. Bookmark the permalink.