Texas Slim and The Not So Silent Night

Posted on December 17, 2014 by silaschampion

Here’s a holiday short story. Hope you enjoy it.

Texas Slim and the Not So Silent Night

Texas Slim jammed his battered hat down lower, trying to cover the top of his ears. Old Man Winter had come to the Texas plains and he was in a bad mood. It was like somebody had stolen his favorite teddy bear. Snow whipped around Texas Slim and his tired horse. The wind pounded his back like a hammer. Texas Slim was a cowboy, though, and cowboys don’t let little things like blizzards keep them inside. 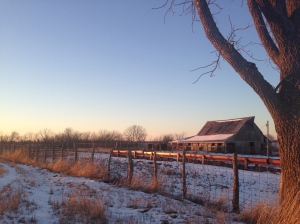 “Stupid cow,” Texas Slim grumbled. Most cows had their calves in the spring, but this one was on her own schedule. She could have her calf any day. He wanted to bring her back to the barn, but when the storm started she had wandered off. Texas Slim grumbled until he reached willows. The wind changed from a large hammer to a smaller hammer when he reached the shelter of trees. The leafless branches whipped in the breeze like crazy dancers.

Texas Slim stopped his horse and swung down. He hobbled around on cold feet looking for a place to build a fire. It took him four tries to get a match lit, and then the wind blew it out. After some more grumbling, he tried again and finally got a small fire burning. Once it was burning brightly, he threw lot of logs on it and made it a big fire. He sat as close to the fire as he could and after ten minutes he felt better. That’s when he heard the sound of a horse coming through the snow. He stayed by the fire, watching the rider approach.

It was his friend Pecos Pete he knew. Pecos Pete wore a huge overcoat made from sheepskin. Snow had settled on it and it made him look twice as big as normal, and his normal was already pretty big.

“Now that’s a good idea.” Pecos stopped his horse next to the fire. “I’m freezing my behind off.”

“You got plenty to spare,” Texas Slim said. Pecos Pete laughed and got off his horse.

“You didn’t have no luck either, huh?” Pecos extended his hands toward the fire.

Texas Slim poured his friend a cup of coffee. “No, the stupid thing disappeared. Snowing too hard to follow her tracks.”

Pecos Pete took the coffee. “I reckon we’ll have snow for Christmas.” Texas Slim grunted. He’d forgotten it was Christmas Eve. Not that it mattered much, except the cook had probably finished making cookies by now. Texas Slim’s stomach rumbled as he thought about it.

“I guess we’ll have to let the old rip take care of herself tonight,” he said, “I’m for heading on into town.”

“I ain’t going to argue with you.” Pecos Pete sipped his coffee. “We need to test those cookies before the Christmas show starts.” Every year the local church held a Christmas pageant where the kids sang songs. They also reenacted the birth of baby Jesus, which was considerably more pleasant than sitting the snow waiting for the birth of a baby calf.

“Just make sure to leave some for the kids.” Texas Slim stood. “You warmed up enough yet?”

“I’m good. Let’s get out of here.” Pecos Pete swallowed the rest of his coffee. Both men hated to leave the cow, but there was nothing else they could do. They didn’t talk much because the wind blew in their faces now. After an hour, they could see a few flickering lights through the snow. They were almost to town. Pecos Pete stopped his horse.

“Look over there.” He pointed at a tangle of bushes. A small deer thrashed the bushes back and forth. Somehow he’d caught his antlers in the thick brush and he couldn’t break free.

“How do you suppose he did that?” Texas Slim asked.

“I never seen nothing like that before,” Pecos Pete said. They watched the deer struggle in silence for a moment. Then they rode forward at the same time.

“Reckon we ought to get him out.” Pecos Pete swung down from his horse. Both cowboys had eaten plenty of deer in their lives, but neither liked to watch an animal suffer. It only took a few minutes before they cut the poor critter free. They expected him to run away, but he was too tired and just sank to the ground.

“I guess we got here just in time.” Texas Slim turned to go.

“Wait,” Pecos Pete said, “I got an idea.” Texas Slim stopped. Pecos Pete picked up the exhausted animal. “I think we found a reindeer.” He grinned.

“What are you talking about?” Texas Slim said.

“We hitch this little guy onto the front of that old sleigh by the church. When the kids come out, we can pull it in front of the church.” He chuckled and swung the deer up behind his saddle. The deer kicked a little but then lay still.

“How’s that little deer going to pull the sleigh?” Texas Slim shook his head. “Anyway, he’ll just go nuts when he gets his strength back.”

“Oh, he won’t really pull it.” Pecos Pete tied the deer’s legs with his rope. “It will just be for looks. You and I can push the sled. We’ll let the little guy go after the kids come out.”

“I don’t know. I’m thinking this ain’t a good idea.” Texas Slim climbed on his horse. He didn’t want anything except a warm wood stove and some cookies.

“Come on, it’ll be fun.” Pecos Pete made sure the deer was secure. Once he got his strength back he’d be kicking and flailing like nobody’s business.

“Don’t be so growly.” Pecos Pete climbed onto his horse. “The kids will love it.” Texas Slim grumbled a bit more, but like his friend he had a big heart under his rough exterior. They rode into town. It only took a few minutes to get the sleigh into position. The deer kicked a little as they got him lashed into place.

“He’s getting feisty,” Texas Slim said. “You better make sure he’s tied down.”

“I got him, go get the toys,” Pecos Pete said. The sound of Christmas carols came out from the church. Texas Slim went inside to grab the bag of presents. Every year the townsfolk gave out simple presents at the end of the Christmas pageant. Officially it was to celebrate the season, but Texas Slim figured that the minister did it to encourage attendance.

The warmth of the church felt good on his frozen face. The minister stood in the back, watching the children sing. Texas slim slipped up to him and whispered in his ear. He smiled and nodded toward a huge bag by the back door. Texas Slim grabbed the bag and slipped out the door. When he got back to the sleigh, Pecos Pete stood in it, trying his best to look jolly.

“You ready, Santa Claus?” Texas Slim tossed the bag of toys in the back.

“I’m ready.” Pecos grinned. “You ready to push?” Texas Slim groaned and took his place behind the sleigh. The church doors flew open and screaming children ran into the yard. The deer had regained his strength, and at the sight of screaming children, he leapt to his feet. Pecos Pete had tied him so he could stand but not run away. Now, in his younger days, before he’d become a cowboy, Pecos Pete had been a sailor. He was good at tying knots. Normally, if he tied something it stayed tied. Today, though, his cold, stiff fingers betrayed him. The ropes loosened around the frightened deer’s feet.

“Ho, ho, ho!” Pecos Pete thundered. That was too much for the deer. With a frantic lunge he tore free of the ropes and jumped right over little Billy Brown. The children screamed and parted before the deer like the Red Sea. The deer took two more steps, then turned left to avoid running into the minister.

As he darted to the left, his antler caught on the robe of one of the wise men. The wise man wisely threw up his arms and the deer pulled the robe right off him. The deer kept going, but unfortunately the robe covered his eyes. The children screamed as the deer ran right into the church.

“Get him out of there!” shouted the minister. Pecos Pete and several other men raced for the church. Loud crashing and yelling came from inside the church. Texas Slim reached the door first. He had one glimpse of panicked people standing on pews before the deer returned to the doorway and all he could see was a red robe coming at him.

“Move!” He shouted as he jumped to the side. He barely made it, but Pecos did not. The deer slammed into him and they both went out the door together. Pecos Pete held tight to the deer, which allowed Texas Slim to jerk the robe off the poor animal. After a quick, frightened tap dance on Pecos Pete’s chest, the deer darted off into the night.

It took a few minutes for the hubbub to die down. People milled about, talking, crying. Some screamed and some even used words you should never use in church, especially on Christmas Eve. All of them looked at Texas Slim and Pecos Pete.

“What is the meaning of all this?” the minister said in his most ministerly voice. Pecos Pete rubbed his aching chest as he explained. Luckily, his thick coat had prevented any serious injury. As he talked, everyone calmed down and even got a chuckle out of it. Some quick-thinking women managed to save all the food except Old Edith’s fruitcake and fish head soup. Nobody seemed to mind that.

They gave the children their presents and everyone went inside. People slapped Pecos Pete on the back and called him “deer wrassler.” They called Texas Slim The Matador. After more carols had been sung and all the cookies were gone it was time to head for home.

The storm had passed leaving a thick blanket of soft snow. The wind had stopped and the stars shone so brightly it seemed like you could reach up and grab one. Texas Slim and Pecos Pete rode quietly, almost dozing in the saddle. The snow muffled their hoof beats so they passed with hardly a sound.

“Wait, did you hear that?” Texas Slim stopped his horse.

“Huh? What?” Pecos Pete rubbed his tired eyes. They heard it again, the sound of a calf bawling in some bushes just off the trail.

“You reckon is that old rip had her calf?” Texas Slim guided his horse near the bushes. Pecos Pete followed him. Soon they came to a small clearing where they saw that old cow nursing her newborn baby. The two cowboys sat on their horses watching in silence. After a few minutes Texas Slim spoke.