Posted on December 22, 2016 by silaschampion 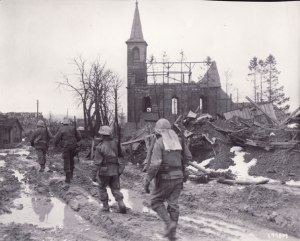 All of us humans are storytellers. Most people won’t write a novel, but everyone shares a story at some time. Perhaps it’s a family memory, or a tale of the glory days of high school, but we all tell stories at least sometimes.

Recently I attended a talk by some veterans of the Battle of the Bulge. The organizers of the event encouraged them to share what their Christmas was like during that battle. Each of them took turns talking about their experiences. As I listened, I was struck by two observations.

First, I was struck by their humility. All of them were humble about their role in one of the greatest battles in history. They didn’t brag about exploits or try to make themselves look brave. They all spoke far more about their comrades’ actions than their own.

Second, they spoke very little about the actual fighting itself and spent more time sharing tiny moments of humanity. When they did mention the fighting it was only to honor fallen friends or mention that it was terrible. Perhaps they would rather not think about the horrors of war, and who could blame them? Perhaps, too, they recognized that we could not truly grasp what it was like since we weren’t there.

All of them shared small moments of happiness and humor. For example, one man shared his experience of finding wine in an abandoned boxcar and drinking it out of his helmet. Another man told of the time he parachuted through a thatched roof of a country cottage and the lady of the house took after him with a broom.

Those men are not novelists, they are not professionals, but in those stories we see the best and worst of humanity on display. From them we take heart and courage to face our own struggles with hope and dignity. Tell your story.

This entry was posted in Miscellaneous Musings, Writing and tagged Art, Battle of the Bulge, History, World War II, writing. Bookmark the permalink.