It’s been a while since I posted, and I know at least a few of you are awaiting more episodes of Canadian Summer. They are coming I promise. The main reason for the delay is that I traveled a lot over the summer, which made it hard to record podcasts. I’ll get back at it when the kids return to school. Today I want to share one of my destinations.

Gruene (pronounced Green) Hall is a legendary location, at least among country music fans. Several Texas artists got their start touring small dance halls and honky tonks like Gruene, all around the Lone Star state. Perhaps, the most famous one to play Gruene Hall is none other than George Strait. There’s even a picture of it on one of his albums.

The former town of Gruene has been subsumed into New Bruanfels, Texas and become kind of an historical island in a sea of suburbia spilling out from San Antonio.

I’d wanted to go for a long time, but this summer was the first chance I got, and I’m glad I took it. The hall is not air conditioned, which will mean some sweating if you visit in the summer. Even so, it was full of people, some dancing, others just sitting and enjoying the music. 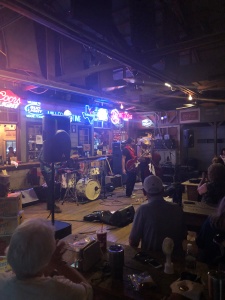 My daughter and her friend tried their hand at the dancing, but I did my best to hold down one of the benches. I think i succeeded pretty well. The Texas heat made that ice cold Shiner taste even better.

I would recommend visiting the music hall even if you’re not a huge country fan. In some way it feels a little like stepping back in time. Old folks, young folks, and everyone in between just having a good time together. Maybe we’d all get along better if we had more places like Gruene  Hall.